Who Knew?  A short history about bricks.

I was on a well know social media site the other day (Twitter) when a fascinating thread came up from @friendschurches Friendless Churches, about bricks which I thought was interesting.  So, a short blog about the brick – I know it’s not interiors, interior design or interior decor, but I am a nerd a heart, and this thread pricked my interest.

Man first made bricks from mud, dried in the sun.  The earliest bricks date back around 7000BC, making them one of the oldest known building materials.  Ancient Egyptian bricks were made of mud/clay mixed with straw.  Evidence of these can be seen today at the ruins of Harappa Buhen and Mohenjo-daro (Indus Valley, current day Pakistan), also in paintings on the tomb walls of Thebes depicting Eqyptian slaves mixing, tempering, and carrying clay for the sun-dried bricks.

Brick technology advanced immeasurably with the invention of the fired/baked/cooked brick.  Not only not reliant on the sun to bake them, these hardened, blocks of man-made stone, became a wonder material in northern climes where sun baking is hard to achieve!  Romans made their bricks in the spring, weathered them for two years before selling, and only used two colours white or red clay for their bricks.  The technology spread throughout the conquered lands, almost dying out with the decline and fall of the empire.  Continuing only in Italy.  Slow during the 12th-century bricks were reintroduced into Northern Europe through Germany.

To make a good brick you need a mix of two types of clay: plastic clay and sand-rich, non-plastic clay to off-set the tendency of the former to shrink and warp during firing. The colour of the brick varies depending on the colour of the clay, firing temperature, level of oxygen and location within the kiln. 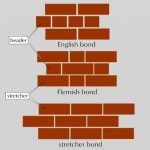 This doesn’t even cover the wonderful variety in laying the bricks, stretchers, bricks laid lengthwise, headers – short end outwards.  English bond – an alternating combination of stretcher and headers.  Flemish bond – stretchers on one course of bricks alternating with headers on the next course of bricks.  Not to mention Running Bond (normal stretchers laid in ‘brick’ style), Common Bond, Stack Bond Stretchers (not good for walls as anyone who has played with Lego will know), double English, Monk Bond and the list goes on.  It is amazing the style and detail that a well laid wall can achieve.  Not to mention the stunning patterns created by using bricks of different colours.  Some amazing examples of which can be seen on Victorian Houses and Homes by Mandy Barrow.

Personally, I love the variety in bricks in old buildings from the Victorian Gothic – pointed edges and intricate patterns, to basketweave patterns on medieval houses.  There is a wall in Low Etherley, near Bishop Auckland, built by Kenny Bowen a brickologist, which tells the story of the Durham coalfield and Northen brick manufacturers.

The Pattern of English Building by Alex Clifton Taylor